Reality - and how to miss it

Sometimes not even a stick of dynamite will make you see the reality hidden beyond our cameras and screens.

Fooled by our Senses

There are a couple of ways in which our senses fool us all the time when we are using technology, cameras and screens.

Seeing the picture, and missing what’s in front of us

I once had the task of photographing a Caribbean Carnival. My pictures showed it was a fun day out. So I decided that next year I would be back without a camera. Why? Because I have learned that a camera often blocks you from experiencing the reality of what you are photographing. 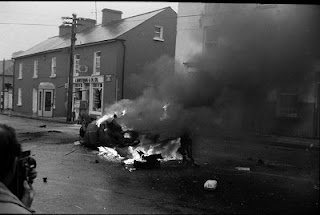 Let me explain: When I was a student, interested in cameras but with no idea which way my career should go, I got a golden opportunity to take some news photos. I was in Blacklion in1974, when a car bomb was driven there in one of the little reported UVF (pro British) terrorist attacks on Ireland. Here are a few of the pictures I took the following morning:
A bomb disposal officer had set off a controlled explosion which blew up the car without detonating the bomb. To get the first shot I ran in ahead of the fire brigade. 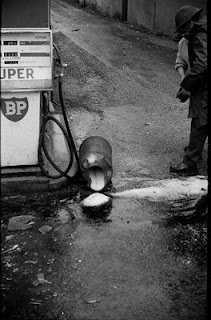 While the car was still burning, the EOD officer came in to recover four pounds high explosives and a ten gallon drum filled with homemade AMPHO explosives, which had been thrown onto the street by the blast.

And yes that is a gas station, next to the burning car, where the explosives landed.

Capt. Boyle was both skillful and brave; he knew that there were enough explosives there to destroy the whole village; he was there to make it safe for the clean up to begin.

When I was taking these pictures I was neither brave nor clever. Because I was looking through a camera, framing pictures, I was blind to the danger to myself and others. At least as soon as I saw the pictures I had the sense to realise that news photography was not the career for me.

Also at the time I was taking the pictures it did not register with me that people I knew, had grown up beside, had come close to being killed, had been evacuated from their homes and now had to put right the damage. 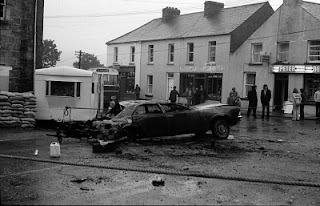 Among the people who had to try to put their businesses back together on this occasion were the parents of celebrity chef Nevin Maguire. Three months before he was born they had this scene outside their front door. MacNean House, and all the other businesses in the Black’, had to live with troops and sandbags to protect them for the next twenty years before a return to some normality.

Seeing the screen but not getting the picture

The other way that we are often fooled by our senses is that when we see images, like these of destruction, they are framed by our TV’s, our computers, our rooms our homes. The reality we are seeing is not part of our reality—we don’t put on a coat when we see pictures of snow.
Some of us can be fooled by cameras some of the time. But we’re all fooled by the screens we see the pictures on. But that is another story.

A report of the 11th September 1974 bombing of Blacklion is contained in the Barron Report see Interim Report on the Report of the Independent Commission of Inquiry into the Bombing of Kay’s Tavern (p167).
The concept that failure to have situational awareness, as a photographer, can cause problems is widely recognised. Only looking through the camera and not around you can lead to falls, walking in front of moving vehicles, or other dangers.
We never get a clear, true, and full picture of reality. We humans are constantly getting through—making sense using whatever scraps of information we have.
Often we get things wrong. The marvel is how far we’ve come, and that we keep going.
Posted by Seamus McGrenery